On Nov. 11, 2016, the summit for the “China’s next 100 global giants”, which were selected by the world’s most authoritative professional accountants association (ACCA) and released to the world, was held at the Shenzhen Zhongzhou Wanhao Hotel, Tatfook ranked No. 21 in the list and was one of the youngest companies among the selected companies. 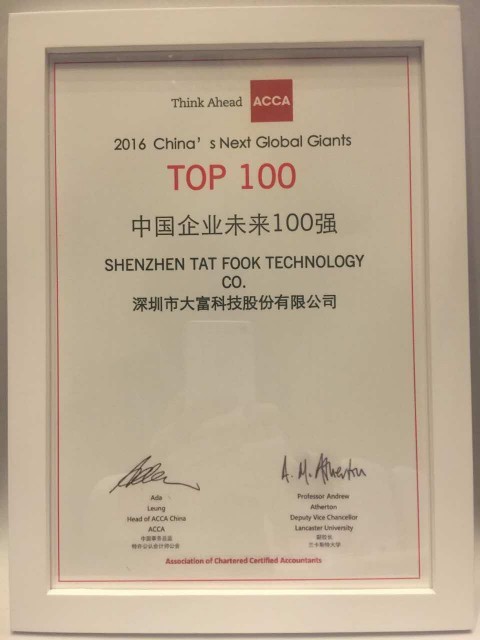 ACCA, the abbreviation for The Association of Chartered Certified Accountants, is one of the most well-known international accountancy organizations in the world. ACCA qualification is considered to be “a pass among the international financial community.” This list chose Chinese companies listed on the stock exchanges at home and abroad, as well as unlisted companies included in the top 500 list of All-China Federation of Industry and Commerce (Federation of Industry and Commerce) as the study objects. ACCA’s accounting firms partners and research directors of the world’s top research institutions have conducted repeated argumentation on the research method, and finally determined multi-dimensional indicators as the scoring standard, i.e. the sustainable growth in sales revenue (annual sales income of not less than RMB 2.25 billion), position in the domestic market (provide a solid foundation for the subsequent development of the enterprise), and its development situation in the international market (determine whether the enterprise is able to transfer the successful model in the domestic market to foreign markets, and represent its ability to operate in different markets outside the domestic market), business models and strategies (ensure that companies can maintain scale expansion and sustainable development in domestic and international markets).

ACCA released the”China’s next 100 global giants” list to the world for the first time in 2014, and its professionalism and authority have been widely recognized. The enterprises in the list have maintained rapid growth and are expanding globally in the recent two years. In 2016, China’s economy was more globalized than in 2014. Under the global economic downturn, these future global giants selected this time are setting sail against winds and waves bravely. It’s estimated by ACCA that in the next 3-5 years, the 100 Chinese emerging enterprises will become an integral part of the global business layout. The enterprises ranking on the top of the list are expected to become the global business giants in the industry and the market in the next few years, and are most likely to rank among the top 500 in the world. 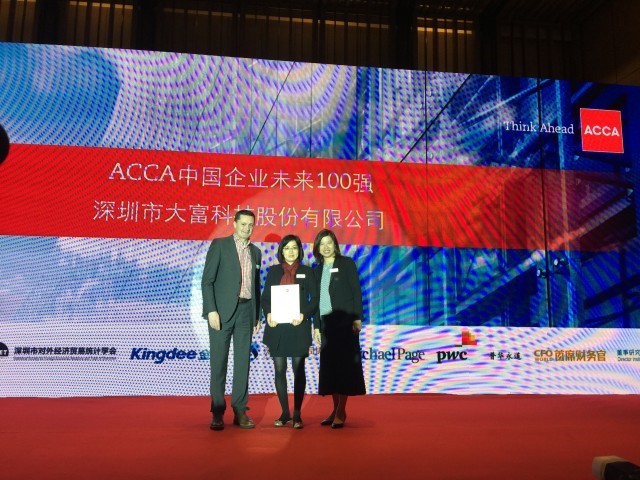 Tatfook scored well in various indicators. In terms of sales revenue, Tatfook has maintained rapid growth over the past few years, with a compound annual growth rate of 27.4%, having a robust growth trajectory in the future. The high scores in this indicator provide evidence for a continued growth of Tatfook in the future.

The following is the 2016 “China’s next 100 global giants” list released by ACCA.